Gods As My Friends

Gods As My Friends 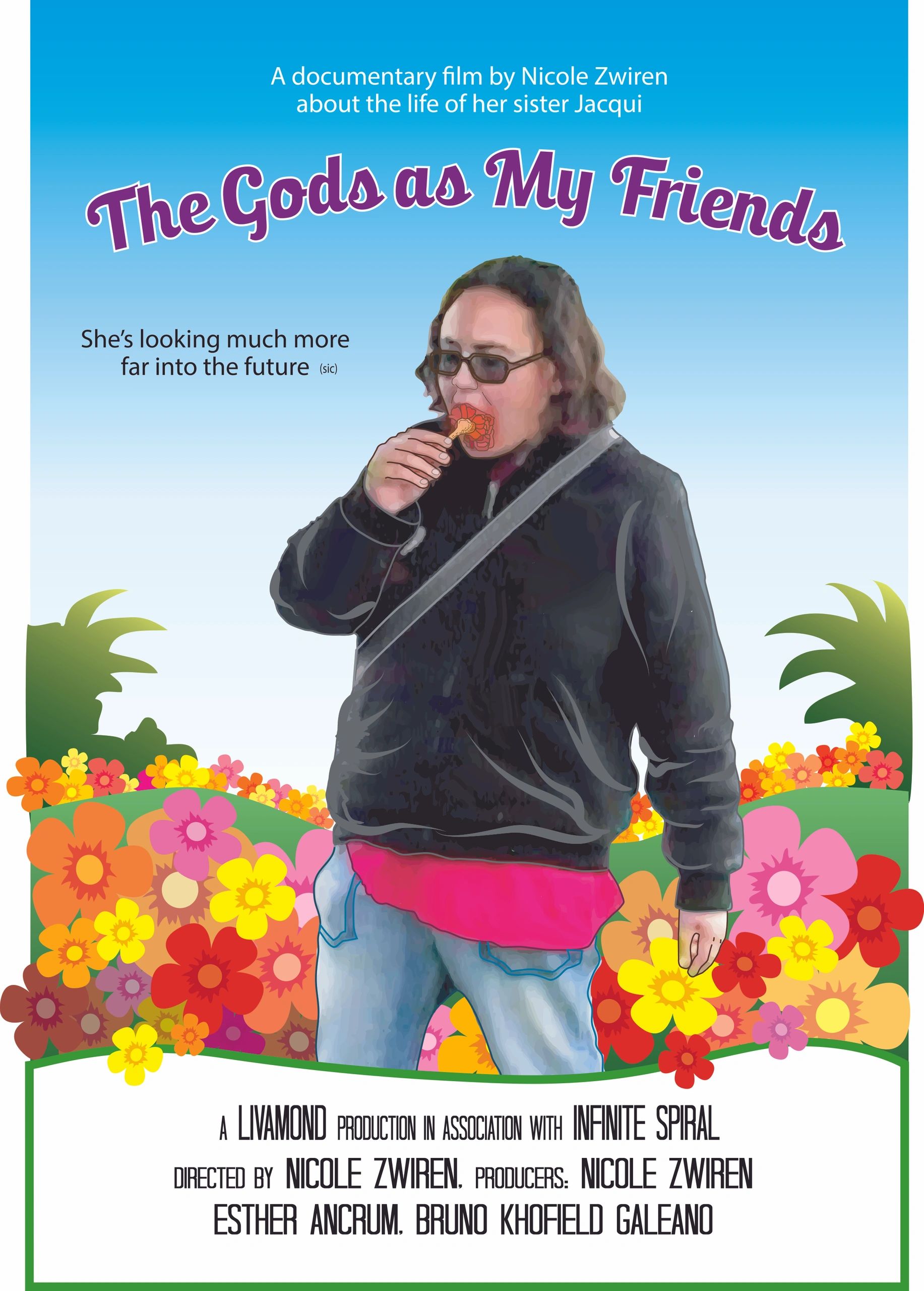 Welcome to Gods As My Friends, A Livamond Production Documentary

What about eternity? Has anyone ever considered that we're not machines, that we have a soul that can't be destroyed? What happens to you after you die? These are the questions that Jacqui asks.

My sister, Jacqui, told me while she was still living on this earth, that according to Jewish law, since I saved her life once, it meant I was now responsible for keeping her alive from then on.  It was as a result of taking too many pills that she went into a coma in 2011, just one year before her death in March of 2012. I went into her room to find her passed out on the floor one morning. This happened during the course of filming the documentary "The Gods As my Friends," which we were planning on originally calling "Wigging Out."

I felt guilty when Jacqui ended up committing suicide. I was away on a trip, and I wish I knew that she was going to do what she did.

What Jacqui was concerned about most on this earth was helping teach people to learn about where they were going after death and to save them from their suffering. She was a friend to all who would listen and she left bundles of love for all her friends to enjoy.

This documentary is one of those bundles of love.

My mission is to help others with the film by spreading the message of love in it and donating a portion of the proceeds from sales of the film to a mental health organization.

Jacqui and Nicole Zwiren - Sisters & the Producer/Directors of the documentary

Jacqui and Nicole were sisters embarking on a feature length documentary film about Jacqui's spiritual journey on the streets of Los Angeles. They decided in 2011 to make the film, which Nicole had already been capturing footage for years before. They wanted to call this film "Wigging Out," since it was going to initially be focused on us buying a wig for Jacqui upon shaving her head to become a Buddhist nun. We wanted to hide the fact that she shaved her head from our Jewish family so they wouldn't freak out because her act of becoming a Buddhist nun indicated that Jacqui was not taking her medications and was losing her mind again. Ironically, Jacqui ended up marrying an Orthodox Jew and was to wear wigs in order to cover her head as a married woman in Jewish society.

I have been making this documentary for 18 years about my sister who went on a spiritual journey to become enlightened as a makeshift Buddhist nun in the streets of Los Angeles, but could not overcome her mentally ill background and ended up committing suicide at age 31 in 2012. She was brought up into a reformed Jewish family and was Bat Mitzvah’d at age 13. And since she was 14 she was a practicing Theravada Buddhist. Since she dropped out of college at age 19 to become a Buddhist nun she had a tendency to interpret religious texts and scriptures differently which led to her mentally ill behavior. She was diagnosed with Schizoaffective disorder due to her creation of her own religion and off-the-wall ideas about spiritualism.

Jacqui’s life was special.  She was a beautifully talented visual and musical artist, the essence of which is captured in this film. And she urged people to consider where their souls would end up in the eternal span.

Her spirit lives on in all of the people who’s lives she touched. Though she was constantly searching for that most important something that she always felt was lacking, love.

Nicole Zwiren and her daughter Maya

Jacqui’s Novel – Jasmine and Rick -available on the Kindle

Now available on the Kindle App: http://www.amazon.com/dp/B00O7VLNU4 for purchase. Please support the legacy of Jacqui and the new film about her life “The Gods As My Friends,” by buying her first novel, “Jasmine and Rick: After Nothing,” which is a Buddhist love story. It’s a hilarious book, very witty, and you will learn so much about Buddhism through this love story. You also will delve into the mind of Jacqui, who’s imagination is quite endless.

Sign up to get movie news and email notifications on special screening events.

Do you have questions or comments about our film?

The Gods As My Friends

Copyright © 2019 Gods As My Friends - All Rights Reserved.